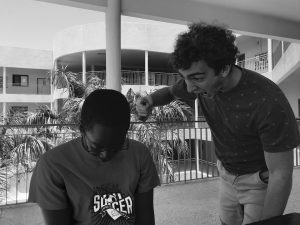 The photo I decided to re-enact was based on the student sit-ins organised by the SNCC in the early 1960s, and depicts a passive student, Tidiane, being threatened and yelled at by a counter protester, Charles. I chose to re-enact the sit-ins due to their popularity in the United States during the 1960s, as well as the swift effect they had across the US during their time with examples like the SNCC sit-ins of Nashville.

I chose to take this photo on the tables on the third floor, and this was because of the view from that place. It is quite beautiful and it was a nice day, as one can see from the photo’s background, and in my mind I felt that if we had been transported back to the era of segregation it would be appropriate for a sit-in to take place in that location. The conditions of white spaces were exponentially better than designated spaces for blacks, and I wanted that to be expressed through the photo. Keeping that in mind, I thought about the motivations I wanted my characters to have.

For Tidiane’s character, I wanted him to be the ideal student seen in most photographs of sit-ins: completely calm, passive and indifferent to the violence and threatening atmosphere around him. This is reflected by his facial expression, which is mostly neutral and is supposed to show him blocking out the words of Charles’s character.

For Charles’s character, I wanted him to be a counter protester to the sit-ins and I modelled who I thought his character was after the members of some of the white mobs in pictures of sit-ins. The character’s anger is directly translated through Charles’s facial expression, and his hand gesture is supposed to show the physical threat protestors at sit-ins where often met with.

Some strategies used in this picture include the use of levels and eye line. Levels are used in the photo very intentionally: Tidiane is placed on a lower level than Charles in order to translate the power dynamic between the two that would have existed during that time, which is also emphasised by Charles’s hand gesture. Eye line is also used to show the behaviour of the characters in the photo: Tidiane is looking down away from Charles in order to convey his passivity in the situation, while Charles looking directly at Tidiane is indicative of his intent in the photo.

Not many resources were needed to recreate this image, minus the actors and a camera. We used a public space to take this photo, and needed very little to get a big message in return.

It can be argued that colonialists strengthened African political structures to a very small extent, if not to no extent.

Evidence that supports this claim can be seen through France’s system of direct rule in West Africa. Traditional West African power structures were mostly abandoned as the French adopted a highly centralised government in Dakar. This Gouvernement-General was in the image of French government, was staffed at almost every level by French officials and did not consider to integrate pre-existing African rulers into the hierarchy. While it is true that some Africans were granted power by the French, for example Blaise Diagne and Galandou Diouf, they were being elected to French bodies of government like the Chamber of Deputies and the inclusion of Africans into this structure was only in four communes of the hundreds that constituted French West Africa. Additionally, France’s disdain of traditional power structures can be seen in its policies. One such policy is that of assimilation. Although it ultimately failed, it advocated for the complete suppression of African culture and the integration of Africans into the French “civilised” culture. This idea of an “inferior” culture shows that the French would have no interest at all in acknowledging the validity of pre-existing African political structures.

There are, however, some cases which do go against the argument. In indirect rule systems like some of Britain’s African colonies, it can be argued that the British did strengthen African political structures by investing in pre-existing social hierarchies. For example, in Nigeria the British used the Yoruba and Hausa’s social hierarchy to their benefit and gave chiefs power with the agreement they would report to the government. Even though these chiefs were at the bottom of the ladder in terms of the colonial government, this act still gave legitimacy to Nigeria’s traditional power structure. However, there are two problems with this as firstly, young Africans were mostly not empowered by these actions. Besides that, there was a far bigger trend of destroying or delegitimising African political structures which discredits the idea that Nigeria can be seen as representative of broader practices. Britain itself was a proponent of this trend in other countries, like in Kenya or Southern Rhodesia where white settlers gained sizeable traction in their respective colony’s political landscape.

Thus, it is extremely hard to say that European colonists strengthened African to anything more than an extremely small extent as most colonial powers opted for direct centralised rule like France or indirect rule which, in some cases, gave chiefs very limited power like Britain.

While the First World War ended almost one century ago, some of its effects have had such an impact they can arguably still be felt today. This blog post will outline two of the most notable effects of the Great War, and why they are significant.

The League Of Nations

The League of Nations, founded through the 1919 Treaty of Versailles, was one of the most significant effects of World War One. Firstly, the LoN was extremely forward-thinking in its premise and advocated for policies that were groundbreaking (and might have pushed the envelope) for its time: for example, collective security which called for all members of the LoN to come to the military aid of another member if said country were to be attacked by external forces. While this did ultimately fail, one can argue that the premise of the League of Nations inspired the United Nations, which was built on the same principle of collective security and has performed well compared to its predecessor. As the LoN was a breakthrough in foreign relations, it was also significant as the reaction towards its inception revealed the general attitude towards foreign relationships around Europe: while Wilson and his ideals were well received by some European nations like Britain, great powers like France were less concerned with ideals and more with the reality of being neighbours with Germany who they feared might come back and enact vengeance upon France.

The Redrawing of Borders through the Treaty of Versailles

As the Treaty of Versailles created the League of Nations tried to ensure global peace, it also dissolved multiple empires and created mandates and sovereign countries in their place. This marked a new era for Europe as it fulfilled a philosophy of national self-determination which was significant as it marked change. Most empires in Europe before 1914 were multi-ethnic (ie. the Austro-Hungarian Empire) and weren’t . This completely shifted after the Treaty of Versailles, when ethnic groups could come together and claim a nation as their own. An example of this is Yugoslavia, which was founded as a nation to reunite Slavic people under one common administration. This fulfilled the Pan-Slavic ideology present in the Balkans before World War 1, and the country successfully united up until the late 1990s. The creation of mandates and protectorates, like that of Iraq, can also be argued to have sped up the process of self determination outside of Europe.

The Ludendorff Offensive was a German offensive launched in March 1918, which was supposed to be the final offensive of the war in hopes that it would defeat the British Forces and drive France to seek armistice with Germany. However, this ultimately failed as Germany failed to capitalise on its gains during the start of this attack and was forced to retreat back and eventually surrender. The offensive holds historical significance due to its role in causing the downfall of Germany in World War One, as their loss and the following conditions caused by the numerous treaties they signed can be argued to have contributed to the outbreak of World War Two. However, this attack also holds significance as it credits the style of attrition warfare: Germany was unable to capitalise on its territorial gains at the beginning of the offensive due to its lack of resources and manpower, especially in the face of the United States who had joined the allies with much more resources and men. This threat of the US pushed them to attack, but it crumbled due to the overwhelming possession of resources on the opposing side and acts like Britain’s naval blockade which weakened the country over time. It did finally show that continuous attack on the enemy could be the way to victory, which was the concept upon which the nature of WW1 was founded.

Military map of the different parts of the Spring Offensive

Edith Cavill was a British nurse living in Belgium at the outbreak of World War I and, after the German occupation of Belgium, started sheltering British and other Allied soldiers before smuggling them through a network over to the neutral country of the Netherlands as well as transferring information. Eventually, German officials grew suspicious of her and, after uncovering what she had been doing, executed her by firing squad in 1915. Cavill is significant for her contribution to the resistance movement against Germany during World War I as she shows the way even normal citizens were dedicated to the war effort during the first months of the conflict. Her story is also important for its impact: after her execution, Britain used her story for anti-German propaganda in other Allied states and portrayed her as a martyr who died at the hands of the cruel and brutal German government.

Kaiser Wilhelm II is one of the most influential people in the lead up to World War One due to his beliefs and actions that caused some of the biggest developments in pre-WWI Europe. The Kaiser was the one to push for the foreign policy of Weltpolitik (world politics in German) in his empire which prompted Germany’s introduction into the arms race and the Scramble for Africa (albeit at a later time than the rest of the European powers). His personal standpoint greatly affected the stance of the German empire concerning Great Britain, as a personal hate or envy he had for the nation pushed him to want to build a fleet to rival theirs. These actions, influenced by his own personal bias, pushed the possibility of an Anglo-German alliance and can be thought to have pushed Britain towards France and Russia instead.

A portrait of Kaiser

The Bosnian Crisis of 1908 is also significant in its effects on pan-Slavism and south-Slav nationalism. The annexation of the provinces of Bosnia and Herzegovina is important as it drove tensions between the Slavic people (nations, like Serbia and Russia, as well as ethnic Slavs within the provinces and the rest of the Austro-Hungarian Empire) and the Austro-Hungarians: Austria-Hungary even mobilised against Serbia and could’ve have caused war if not for Russia accepting an ultimatum from Germany in 1909. This agitation caused animosity towards Austria-Hungary from the Slavic nations and could have even been the reason behind the formation of the Black Hand, a Serbian secret society that wanted to unite all south-Slav peoples under one nation. This crisis also pushed Russia to encourage Serbia into inciting anti-Austrian agitation amongst the Slavs living in the Austro-Hungarian Empire.

Alexander Izvolsky, Russia’s Foreign Minister at the time of the annexation

Welcome to your brand new blog at Edublogs!

To get started, simply visit your blog’s dashboard, edit or delete this post and check out all the other options available to you.

We can walk you through step-by-step in our guide to getting started with your blog.